Southampton down to fourth after Shelvey screamer sees Swans win at St Mary's.

Southampton lost at St Mary's for only the third time this season, beaten by Jonjo Shelvey's 25-yard screamer as Saints paid for their own ineptitude in front of goal.

A battle between two depleted squads, Swansea produced an excellent second half display that leaves Southampton level on points with Arsenal in fourth.

The home team made two changes to the line up, with Harrison Reed and Maya Yoshida coming in for Swans' new-boy Jack Cork and Florin Gardos.

That the Saints absolutely dominated the first half makes the result difficult to take, with a host of players guilty of wasting chances. Dusan Tadic's miss was perhaps the worst of the lot, after the impressive Elia found him in the box with an inch-perfect cross.

The half time statistics showed that Southampton had 68% possession but nothing to show for it. Swansea had just three touches in Southampton's box throughout, and emerged in the second half full of purpose.

Ronald Koeman reacted by bringing Mane on for Reed just on the hour, who forced Ashley Williams into clearing off the line twice late on. The Swansea Captain was immense throughout, with his performance epitomising the visitor's dogged approach. 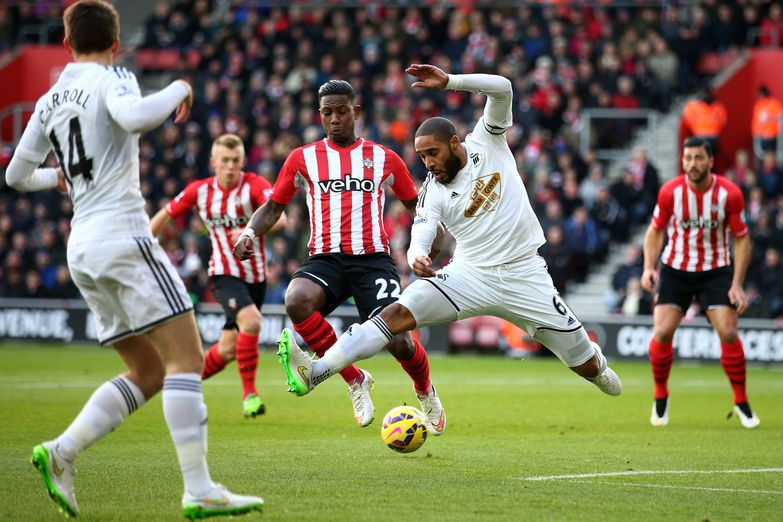 Shelvey was also defiant throughout, grabbing the game by the scruff of the neck with less than ten minutes to go. Shifting the ball onto his right foot, the former Liverpool man hit a pile driver into the top corner from 25 yards. Forster was unable to keep it out despite getting a glove to it.
Fraser Forster got lucky on 58 minutes, rushing out to prevent a corner and almost gifting Neil Taylor a goal. Moments later, Shelvey hit the post after the Saints defence backed off. Full credit to Gary Monk for drastically altering things at half time.

Saints rallied, but Ryan Bertrand's red card took the sting out of the game. Fully deserved, the defender injured Modou Barrow - who replaced the injured Marvin Emnes after just fifteen minutes - in coming over the top of the ball.

Pelle blazed over from inside the box in extra time, but Swansea were dogged and deserved the victory - revenge for the reverse fixture that Southampton pinched.