Southampton earned a fully deserved point at Stamford Bridge with an excellent away performance.

Share All sharing options for: Saints dig in for Stamford Bridge point

Southampton scuppered Chelsea at Stamford Bridge in an impressive away display. In a true game of two halves, both goalkeepers stole the show in an entertaining 1-1 draw.

Diego Costa put the hosts ahead ten minutes in, heading home Branislav Ivanovic's cross while unmarked in the six yard box. Yet Saints rallied to boss the first half, scoring through Dušan Tadić's penalty after Nemanja Matic brought down Sadio Mané in the box.

Matic - fortunate to be playing following the FA's decision to reduce his three match ban - was lucky to have remained on the pitch with several fouled after being booked.

Saints were much the fresher team in the first half following an eleven day rest in which they went to Switzerland to sky. The trip appears to have worked wonders, with the away team producing a solid performance across the whole team.

Morgan Schneiderlin also had an amazing game, making countless and interceptions throughout. Shane Long, starting in place of Graziano Pellè, was a constant menace throughout, harrying the slow Chelsea defence alongside Mané.

While the Saints had the better first half, they had to dig in for most of the second, with Costa, Eden Hazard and Willian dancing around the pitch for much of the second. 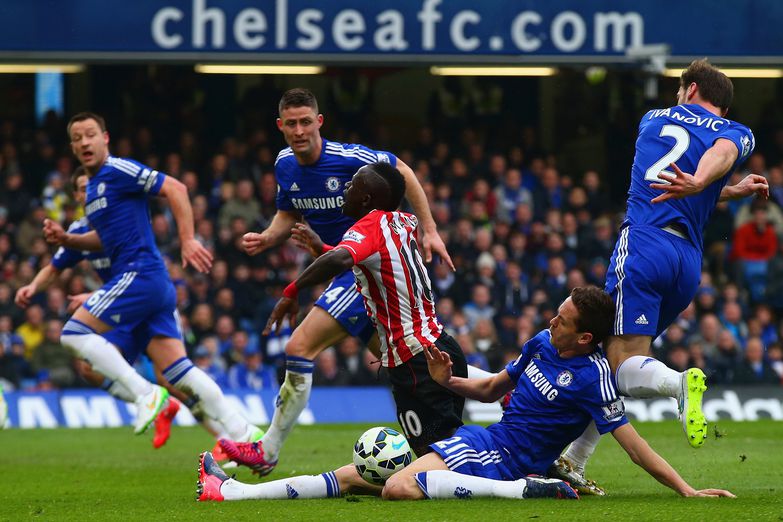 Victor Wanyama, who also had a solid game, was let off the hook after losing the ball sloppily early on, Fonte blocking Willian's shot.

Mane and then Tadic then went close, with Thibaut Courtois saving well from the Senegalese striker. Where Chelsea will feel they should have won the game, Saints also wasted great chances with shot-shy Tadic dancing through several challenges in the box to release Long. Courtois denied the Irishman, with the Chelsea stopper matching Forster's heroics in goal.

Ivanovic and Costa both saw penalty claims dismissed - with the theatrics failing to impress referee Mike Dean. As the game wore on, Southampton dug deep, with several goal line clearances. Costa hit the woodwork, Forster made a double save and John Terry thrashed a chance to win the game wide late-on.

In the end, both teams had chances to win the game, with Chelsea applying pressure and Southampton counter attacking through pace and good flick ons. Importantly for Saints, every man performed. Yet both keepers stood firm.

Saints look to have their mojo back in front of goal, and with players back fit, the chase is back on for Saints' Champions League dreams.