Share All sharing options for: Saints go fifth after Pellè and Ward-Prowse score

Southampton moved two points clear of Tottenham and Liverpool after a two-nil win at home to Hull City.

In what was a significant day for both clubs, the Saints had to wait until the second half to break down the visitors, who are now just a couple of points from the relegation zone and face an abhorrent run-in.

Graziano Pellè scored his first league goal this year while 20 year-old academy graduate James Ward-Prowsenetted his first for the club in league football.

With manager Ronald Koeman reportedly having told the under England under 21 Captain to take the penalty, Ward-Prowse and Pellè will be thanking their team mates for the chances.

Shane Long was brought down for the penalty - finally winning one after being clattered on many occasions this year. With Ward-Prowse confidently dispatching the penalty, Saints took control of the game and never looked back. 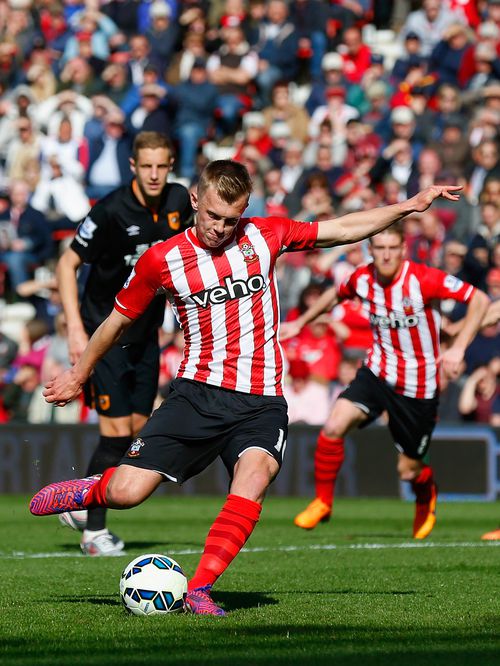 Things got better for the home side e following good work from substitute Dušan Tadić, who found Morgan Schneiderlin in the box with the Frenchman unselfish enough to gift Pellè with his first in 15. The Italian finished well from close-range and looked ten years younger after beating Steve Harper.

Hull City now face a daunting run-in where they will have to beat the top teams to avoid relegation, and were the better team in the first half. Despite the visitor's efforts, Southampton had the better chances throughout and deserved their win in the end.

Saints club Captain and veteran goalkeeper Kelvin Davis had an excellent game, assured between the sticks apart from one sliced clearance which luckily fell to José Fonte - celebrating his 200th appearance for the club.

The only sour note for the hosts was a tenth yellow card of the campaign for Victor Wanyama, which rules him out for games against Stoke and, crucially, Spurs. With Tottenham losing at home to Aston Villa and Liverpool playing on Monday night, Saints now chase Manchester City from fifth place. Steven Davis also capped off a rare poor game - blazing over from five yards late on in the second half.

With Koeman admitting that his side's first half performance was "not good", Southampton will hope that important goals for Pellè  and Ward-Prowse will reignite his team's form in front of goal.