Southampton's Champions League hopes are over after conceding two away from home for the first time since August.

Southampton's faint chances of qualifying for the Champions League were extinguished as they lost two-one at Stoke City.

Goals from Charlie Austin and Steven N'Zonzi gave Stoke the win as Southampton missed the chance to go two points behind Manchester City in fourth place.

A poor second half Saints showing saw the visitors gift two goals to Stoke, despite being a goal up during the break. A worrying injury to Toby Alderweireld capped off a disappointing afternoon for the south coast side.

Everything was going to plan at half time, with Morgan Schneiderlin's tapping in Captain José Fonte's goal bound header following a corner. 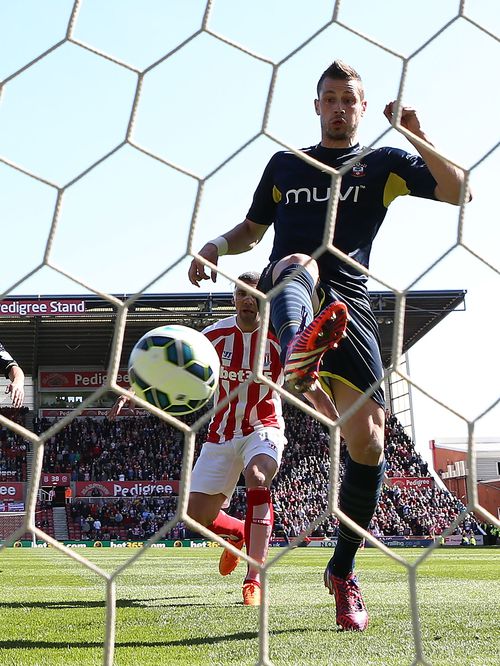 Despite the goal, Stoke had succeeded in drawing Southampton into a fight, with the the visitors obliging in conceding fouls and possession with poor passing. Saints were outfought throughout.

One man who was up for the scrap was Ryan Bertrand, who had Jonathan Walters in a headlock early on and made a daring sliding challenge in the box minutes later. Mané then tried a dive in the box but to no avail.

In truth, Stoke should have won by more with N'Zonzi guilty of spurning several gilt-edged chances. Saints were even less clinical and were gifted few clear sights of goal.  Peter Crouch let his team off of the hook late on in the game, with Southampton sloppy all over the pitch.

Mané, by far the best player in a Saints shirt, seemed to be operating on a totally different frequency to his Southampton team mates. The Senegalese player set Nathaniel Clyne and Graziano Pellè with difficult chances in the first half, while his cute back heel found no one gambling in the box in the second.

In what was a sanguine showing from the Saints, few players had days to remember as Stoke wrestled the game from them and took their two gifts with ease.

The first goal saw N'zonzi's cross loop on to the bar and tapped in by Mama Diouf seconds into the second period. The winner was sloppier still, with Southampton's usually calm defence failing to clear their lines. Substitute Charlie Adam's neat turn and volley hit the ground before passing veteran goalie Kelvin Davis, who might have done better with both.

Graziano Pellè was guilty of being selfish with his tame shot at the keeper while Dušan Tadić  was unmarked in the box. The Serb was also guilty of being wasteful, failing to beat two Stoke defenders on the line with Asmir Begović caught in no man's land.

Those chances, in addition to Sadio Mané being wrongly flagged offside after a great ball in behind from Pellè, were pretty much all Southampton could muster.

With Alderweireld likely to join Victor Wanyama on the sidelines for the next game (at least), Saints face a crucial game at home to Spurs next weekend. Given the tame performance, Ronald Koeman has some thinking to do before then.