Everton edge out Saints at Goodison

Share All sharing options for: Everton edge out Saints at Goodison

Southampton missed the opportunity to move above Liverpool  into fifth following a 1 - 0 defeat to Everton at Goodison Park.

In a game of few clear chances, Phil Jagielka's bundled effort was enough to give the hosts a narrow victory in what was a very even contest.

The visitors started brightly following the international break, with neat play full of flicks and one-two's - yet goalkeeper Tim Howard was rarely tested throughout.

Graziano Pellè was spectacularly denied by Howard just five minutes in after Shane Long knocked it round Leighton Baines and put a scrumptious cross. It was to prove the best chance Saints had all game.

Kelvin Davis gave a good account of himself, with the Saints veteran goalie given very little to think about until Southampton's defence was caught sleeping at a corner after quarter of an hour.

James Ward-Prowse later went close with a bending free kick that had Howard rooted to the spot. The young Saint should have done better after being released via a great ball in over the top by Pellè . Seconds later he forced another good save from Howard from the edge of the box. It was to sum up Southampton's afternoon where they huffed and puffed, but could not find a way through.

Leon Osmon spurned a great diving header wide moments after receiving treatment for a clash with Long. That the game had so many stoppages for head collisions epitomised how the game was a battle from start to finish.

Sadio Mané was denied a penalty after being barged down in the box, and fellow second-half substitute Dušan Tadić also injected more guile into the Saints attack in the second half, but to no avail.

Everton, now with only the Premier League to concentrate on, dealt with the second half professionally and restricted the visitors to very few sights of goal from there on in. Pellè went close after Tadić wiggled free of three Toffies, before smashing another over with 78 minutes on the clock. The Italian did play well though, linking up play well following good recent showings for Italy. 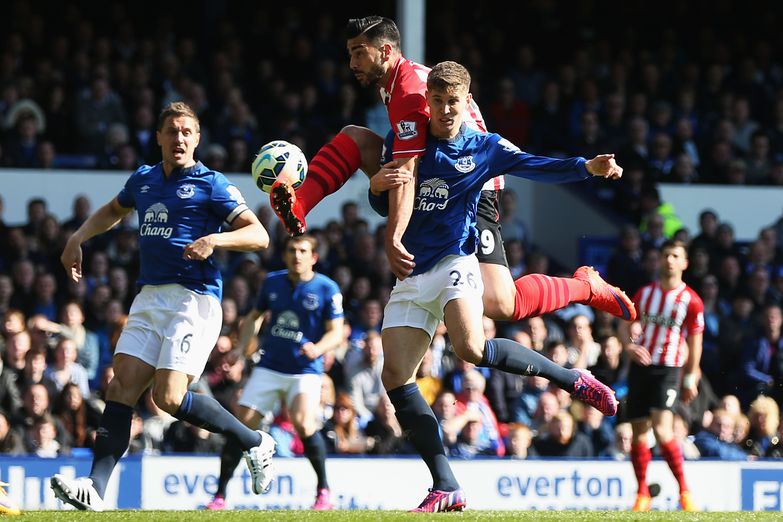 With the home side sitting deeper and countering through Aaron Lennon's pace, the sting was taken out of the game while Saints kept the pressure on during the second half.

Manager Ronald Koeman will now turn his side's attention to the game against Hull next weekend, with Tottenham able to leapfrog them into sixth - and Europa League qualification - should they beat Burnley tomorrow.

While Southampton host Mauricio Pochettino's Spurs in a few week's time, both teams will be watching how Liverpool and Arsenal fair in the FA Cup. If one of them wins it and qualify's for Europe through the league, seventh will be enough to ensure European qualification for next season.