An awful Saints display saw them lose two-nil at the King Power Stadium.

Share All sharing options for: Spineless Saints Surrender at Leicester

Southampton continued their disappointing end of season run after losing two-nil away to Leicester.

Riyad Mahrez's first half double was enough to see off a Saints team who failed to show up to the King Power Stadium.

The visitors were awful from the off, with very little to show for an afternoon's work apart from two pieces of terrible defending.

Mahrez 's first saw him pick up the ball from a throw in and beat weak challenges from three Saints players before firing a low shot last Pablo Gazzaniga. Further sloppiness soon provided the Algerian with a second following a comical clearence from Gazzaniga, given his chance between the sticks as Ronald Koeman looks towards next year

The Argentinian fluffed an easy back pass straight to the home side, with the Saints defence all dragged to the ball and Mahrez left with the simplest finish from five yards. 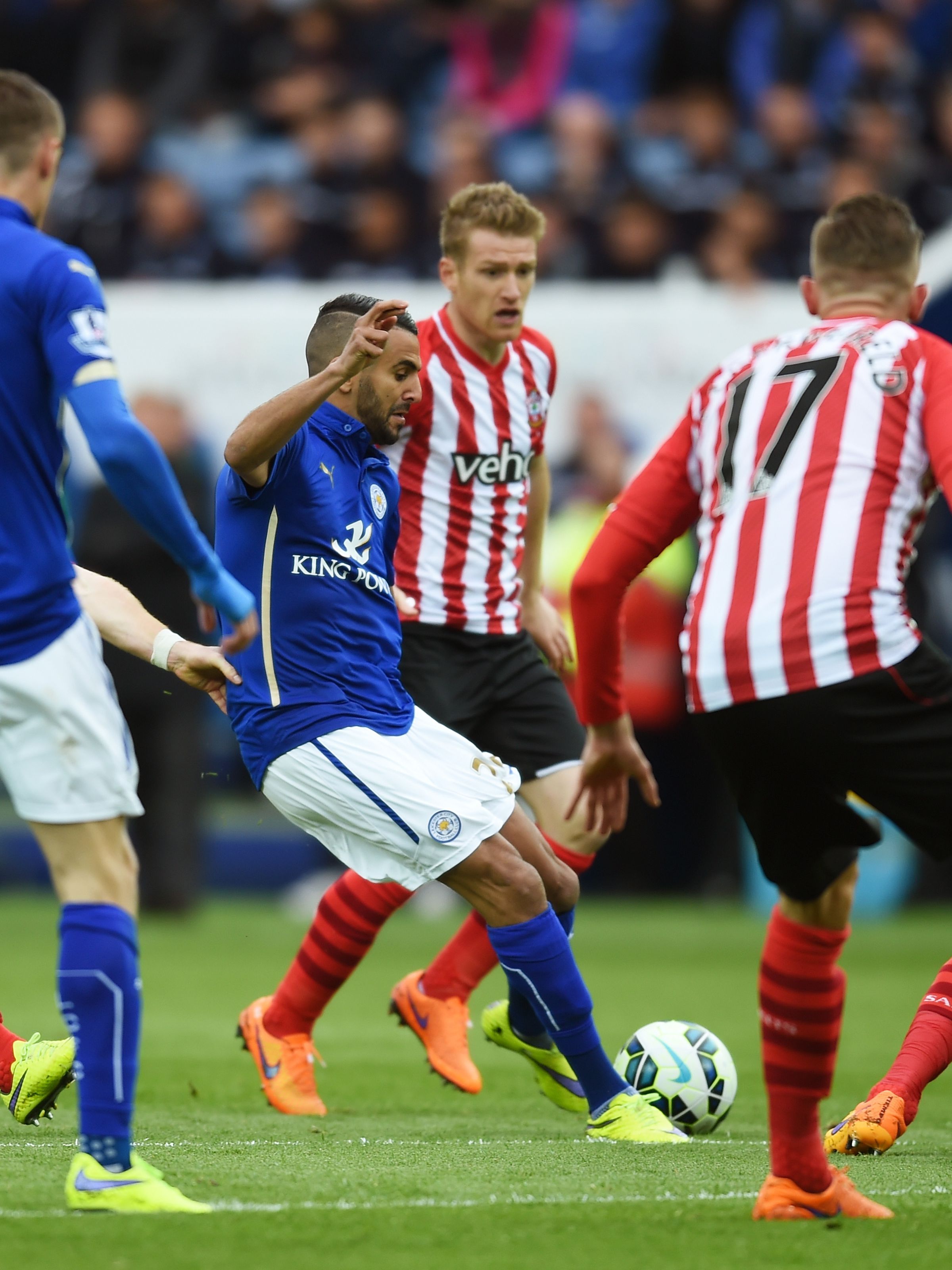 The visitors nearly responded through Harrison Reed moments later, but Kasper Schmeichel denied the young Englishman. Sadio Mané then wasted a free header as Leicester failed to clear their lines.

Gazzaniga saved well from Jamie Vardy, who slipped Victor Wanyama's attentions and tried to put it through the keepers' legs. Morgan's grab on Mané 's shirt in the box went unpunished, and was one of few moments that Saints showed any determination all afternoon.

Wanyama was later lucky to have gotten away freely after catching Marc Albrighton with a late challenge - coming over the ball with his studs. Toby Alderweireld then forced a good save from Schmeichel with a curled free kick.

Saints turned up the pressure in the second half, but Leicester worked tirelessly and used their back three to smother them comfortably. Truth be told, Southampton rode their luck with Esteban Cambiaso's deflected shot easily collected by Gazzaniga and another effort hitting the side netting.

Koeman brought on Shane Long and Filip Đuričić for Eljero Elia and Steven Davis, but his side continued to play as though already on the beach. Nathaniel Clyne scrambled to deny Vardy from racing free again before the Leicester forward was himself replaced.

With 65 minutes gone Saints started to stir with Mané nearly playing Wanyama with a one two and the Senegalese's shot tipped over by Schmeichel. Saints huffed but to no avail - Graziano Pellè's back heel to Filip Đuričić when he should have shot summing his side's display up. Their last point away from home was against Chelsea on March 15th.

Former Captain Dean Hammond was cheered by both sets of fans upon entering the frey, while Matty James will have their sympathies having gone down with a suspected knee injury stretching to keep up with the marauding Ryan Bertrand. What Southampton would give for a fit and firing Jay Rodriguez right now.

The late stages of the game passed with little of note - Southampton's only consolation being that Spurs suffered a worse afternoon with a three nil loss at Stoke. Swansea City can close the gap to seventh to a single point by winning against Arsenal on Monday night, the Saints must improve to avoid an abject end to a great season.