Southampton came from behind to claim one of their most famous victories, beating Inter Milan 2-1 at St Mary's

Share All sharing options for: Saints fight back to claim historic Inter scalp

Southampton earned a historic win at St Mary's this evening, coming from behind to beat Inter Milan two-one.

The home team deserved the victory, despite missing a penalty in first half stoppage time with Antonio Candreva fortunate to not have been sent off for a blatant elbow on Sam McQueen.

Virgil van Dijk's strike and an own goal from Yuto Nagatomo earned Saints their famous win, after Mauro Icardi had put the visitors in a frustrating first half.

Southampton started well, with Jay Rodriguez working the goalie with an early header. The Englishman wasted two further opportunities soon after, failing to bend an effort into the corner and snatching at another. Southampton's play was good, albeit a little pedestrian, with slick passing and the occasional one two.

Inter again showed their superior experience, frustrating Southampton and hitting on the break. They settled into their game of grabbing player's shirts early, with van Dijk on the receiving end throughout the half and the referee uninterested.

The visitors took the lead on the 36th minute, despite a blatant foul on van Dijk in the build up. Cuco Martina's clearance fell to Icardi, who did well to smash it in on the turn low down to Forster's left.

Southampton pressed, and were rewarded with a fortunate penalty just before the break. A corner fell to Pierre-Emile Højbjerg, who drove into the box with the ball bouncing onto Perisic's arm. A soft penalty was called.

Then came a couple of huge moments; Candreva was scuffing the penalty spot with his studs, and Sam McQueen came over to pat down the damaged turf. The Italian then blatently elbowed the left back in the face, but the referee only gave a yellow - how, is anyone's guess. The awful refereeing was then compounded by Dušan Tadić failing to convert the penalty with a pathetic effort, and Southampton were left doubly frustrated. 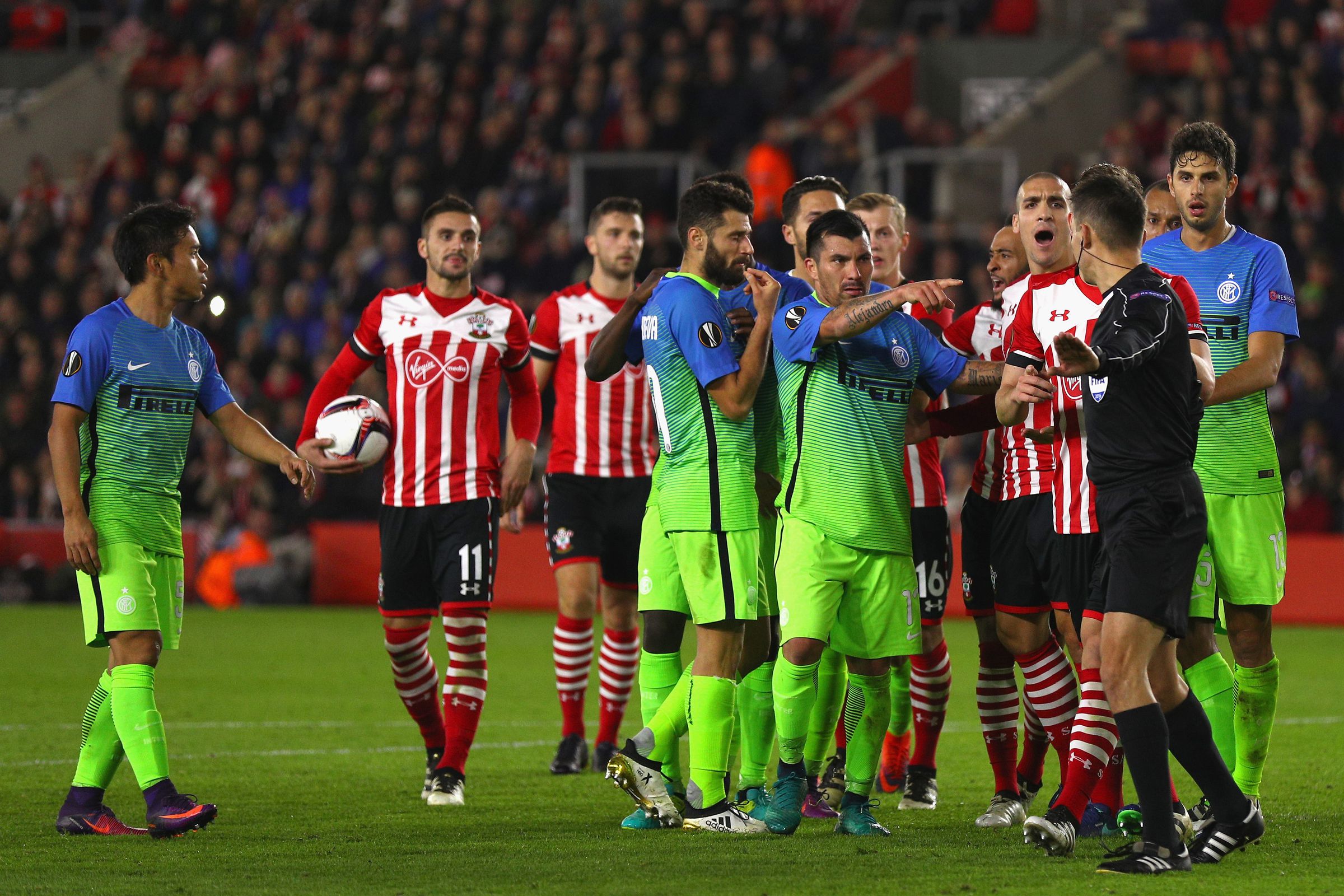 The debacle seemed to fire up the home team, who emerged at half time with the bit between their teeth and took the fight to Inter in an impressive second half display.

Rodriguez and James Ward-Prowse both saw efforts saved before Ever Benega found himself free in the Saints' box, but unable to capitalise. Inter continued their foul play, tugging their opponent's shirts and even rugby tackling van Dijk to the floor on a couple of occasions. Yet the referee did nothing.

Saints continued to pile on the pressure, creating multiple chances before the goals including a lovely drive that saw Pierre-Emile Højbjerg sell a dummy before having a shot blocked just after the hour mark.

The breakthrough came moments after, with van Dijk having a powerful header saved and Saints scoring from the resulting corner. Oriol Romeu's effort looped onto the bar with the Dutch defender pouncing on the loose ball emphatically - upending his marker in the process.

The second followed barely five minutes later with great work from Tadić, whose low cross was deflected off Nagatomo and into the net.

Saints then showed their intelligence, hustling well, drawing fouls and frustrating the Italian team. A rare, poor back pass from Romeu aside, which was wasted by Icardi, Saints saw out the game and could even have added to their lead.

Ward-Prowse - excellent on the night, bar his finishing, blazed a couple of shots over and Nathan Redmond's energy meant that Inter were not able to lay a glove on Saints in the closing stages and moved to seven points in the group.

They now travel to Prague in the next Europa game, and will be confident of progressing into the knock out rounds.

Claude Puel once again rested key players, and head to Hull in the league on the back of an impressive and historic win.