Wes Morgan produced a captain's performance to sink Saints and send Leicester seven point clear at the top of the Barclays Premier League.

The English-born Jamaican's close range header ten minutes before half time was enough to secure the Foxes a vital three points in their unlikely Premier League title challenge, with Saints blunted by the Leicester defence.

All the talk before the game revolved around Leicester being able to hold their nerve, but there were no signs of that, with the title chasers looking comfortable from the off.

Leicester were first to everything, with Jamie Vardy and N'Golo Kante chasing every half ball. Saints helped them too, with a misplaced Matt Targett throw and Ryan Bertrand nearly feeding Vardy early on.

The Englishman was a menace throughout, with two fizzed crosses nearly finding his strike partner Shinji Okazaki and José Fonte on hand to twice deny the Japanese forward. The home team's desire was also on show when Fonte had to make a third block from Captain Wes Morgan's close range strike.

After riding the storm somewhat, Southampton came back into it after 20 minutes. Morgan headed a near post cross from Cédric Soares clear with Steven Davis lurking with the visitors finding space on the wings.

Graziano Pellè and Sadio Mané were a huge threat on the counter, with the Senegalise attacker leading several breaks from inside his own half. On one occasion, Mané was fed excellently by Pellè, who rounded Kasper Schmeichel before lifting a shot into the arm of Danny Simpson. While Ronald Koeman cried penalty, referee Michael Oliver looked right in waving play on as Simpson's arm was down by his side in a natural position - Mané should have either fed Victor Wanyama or buried it low.

Southampton continued to pressure their opponents with several corners and Jordy Clasie and Fonte going close from range. Then, just as Southampton looked to be well on top, Captain Morgan scored on the 37th minute.

Christian Fuchs was given time to deliver a superb cross, with Morgan out-muscling Clasie in the box and heading beyond Fraser Forster. Replays showed a push on Clasie, but Morgan simply bullied the diminutive Dutchman who should have in no way been marking the tall, athletic defender. That Morgan admitted having an arm on Clasie to Sky Sports and checking with the referee after is yet another example of the refreshing, humble attitude of this Leicester team. 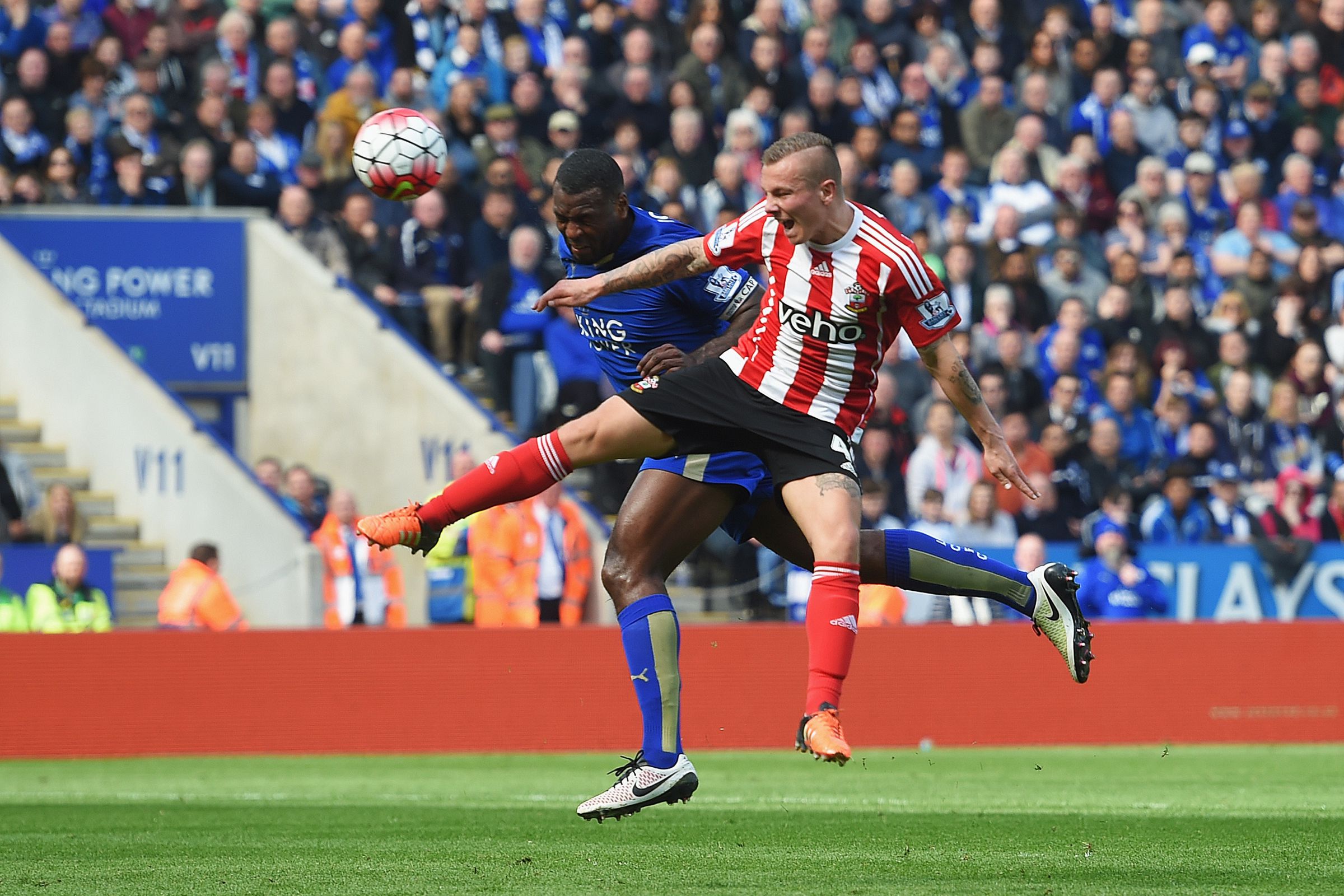 Matt Targett was replaced by Dušan Tadić at half time, but Wanyama was lucky to remain on the pitch for yet another silly foul on Vardy who broke free just seconds after the restart. He would have been the first Premier League player to have dismissed four times in one season.

The second half saw Leicester soak up huge amounts of pressure as Southampton turned up the heat, but a combination of poor final ball and resolute defending saw the Foxes survive the onslaught with relative ease.

In fact, it was Leicester who came closest to doubling the lead, with Southampton slow to shoot and the home team lethal on the counter attack. Just after the hour Leicester broke with Riyad Mahrez's superb ball behind Fonte forcing the Portugal defender to intercept it. Luckily, for the captain, Forster made a great save.

It was Forster who again kept Saints in the game with twenty minutes to go, saving spectacularly from Danny Simpson after yet another outstanding chase down from Vardy.

Southampton kept piling forward but Leicester were defiant and organised spectacularly throughout. That they kept the ball for nearly five minutes towards the final whistle is testament to their professionalism. A second handball shout aside - rightly turned down by the officials - Schmeichel had the most comfortable of afternoons with Bertrand, Tadić and Mané  wasting the few chances Southampton had.

Ronald Koeman went for broke, throwing on James Ward-Prowse and Charlie Austin with half an hour to go but even with their abundance of attacking talent could not break Leicester down. The result leaves Southampton struggling in their fight for Europa qualification, but will thrill neutrals as the Foxes look favourites to lift the title with their 7 point gap.

Not that we wanted to lose this game, of course, and we definitely feel very sorry for Mauricio Pochettino's Tottenham...