Southampton add to West Ham's misery with 3-0 away win

Share All sharing options for: Southampton add to West Ham's misery with 3-0 away win

Goals from Charlie Austin, Dušan Tadić and James Ward-Prowse condemned Slaven Bilic's men to a frustrating defeat as their slow start to life at the former Olympic Stadium continued.

Southampton are on a roll, winning their fourth game in ten days that has also seen Claude Puel's men keep clean sheets throughout.

The visitors have clicked following an average start to the campaign, have found their scoring boots and have seen Puel's tactical changes begin to bear fruit. For all Southampton's confidence, West Ham looked bereft of ideas but will feel frustrated following a string of refereeing decisions that John Moss waved away. While none were clear cut, the Hammers were denied several penalty shouts with Southampton riding their luck and showing no mercy.

The first decision saw Manuel Lanzini, a thorn in the visitor's sides before being hooked at half time for Sofiane Feghouli, clumsily bought down by Cédric Soares while on the turn.

Pierre-Emile Højbjerg spurned a chance to shoot quickly early on, with Ryan Bertrand's cut back finding the midfielder who dawdled when he could have unleashed a shot. Seconds later, Oriol Romeu chopped down Lanzini on the touchline, and was rightfully booked barely ten minutes in. It was just what Saints didn't need in a game where West Ham looked to bully Southampton at every opportunity. Yet Southampton managed the game well, taking their chances and staying strong and composed in possession on the most part. 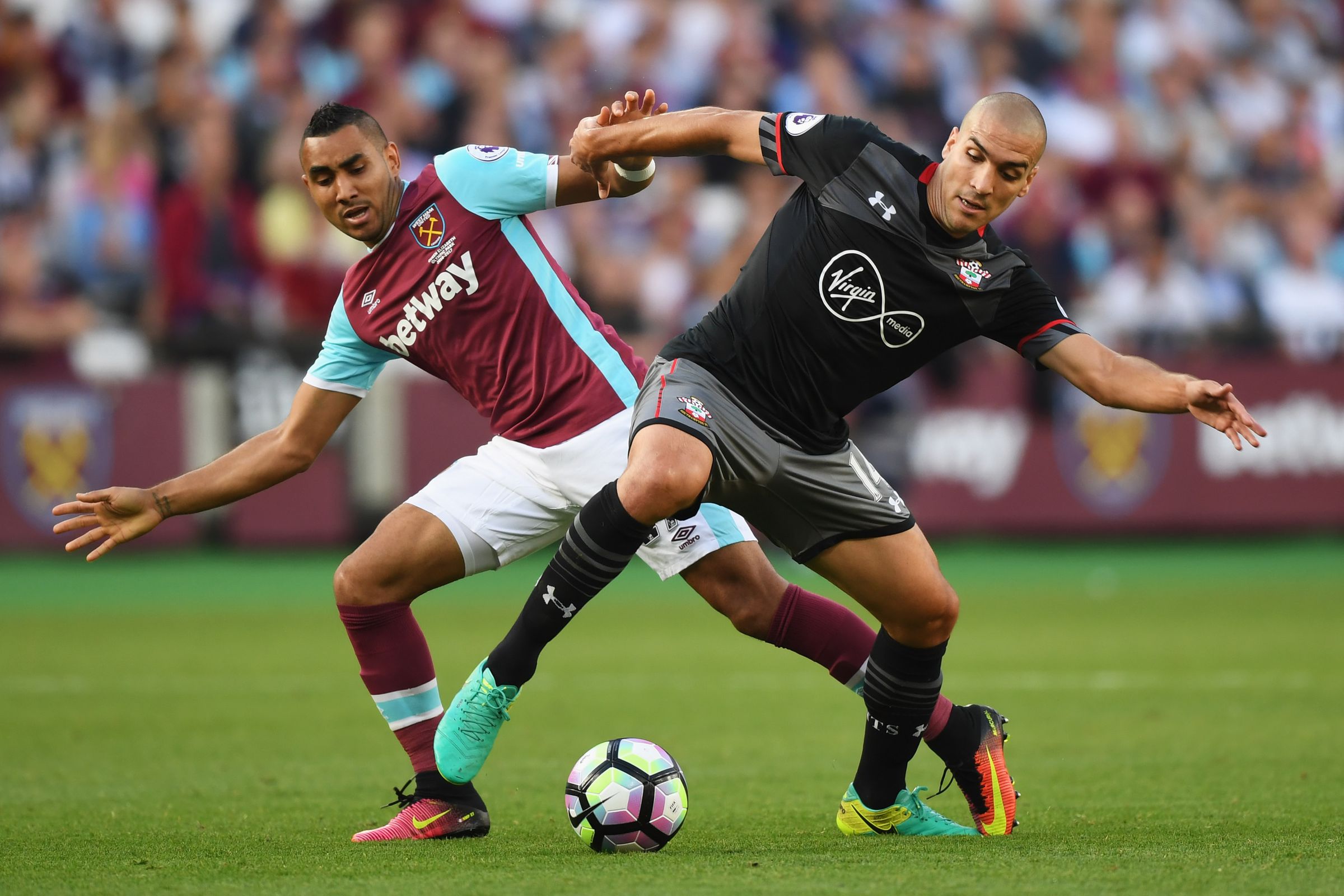 Virgil van Dijk was again impressive throughout, dealing with West Ham's immense aerial threat alongside captain Fonte throughout, with the quality of Dušan Tadić  Nathan Redmond showing through when Southampton were struggling under pressure from the Hammers, particularly in the first half.

West Ham were on top before the goal, with Michael Antonio a menace in the air and on the ground, nearly meeting a corner that was flicked on by Simone Zaza and knocking down a cross into the Italian's path. The clumsy combination of José Fonte and Cédric were again fortunate to not concede a penalty with the West Ham fans baying for blood.

The opening goal came following a period where Saints had to work hard just to keep the ball. Steven Davis expertly fed Bertrand, who overlapped and found Charlie Austin in the box. The Englishman didn't catch the ball fully, but it was enough to beat Adrian in the West Ham goal after the striker had been imploring his teammates to pick put one of his many runs in behind the defence.

The second period saw Southampton go up another gear, controlling the game, showing composure and penetrating at almost at will. Tadić, flourishing in the number 10 position, tormented West Ham, the a highlight being his back heel to Cédric, which the Serbian frustrated to not convert the cut back.

He made amends just after the hour though, after Davis won back possession and Austin feeding Tadić who skipped past Adrian and finished.

West Ham huffed and puffed, and began to peg back the visitors but to no avail. Their best chance came when Dimitri Payet's shot rebounded to Feghouli, whose own effort hit Bertrand in the arm. West Ham couldn't believe it wasn't given - with the referee unable to see and the positioning of Bertrand's arm being seen as natural the probable reasons for a penalty not being given. Not long after, Payet again failed to convert with van Dijk clearing Zaza's shot off the line.

Southampton dug in, with Shane Long and Ward-Prowse coming on and joining the midfield in closing down space and nicking the ball back - something Saints did well all afternoon.

Another of Southampton's best performers, Højbjerg, excelled in the game and saw a great shot turned round the post expertly by Adrian, who kept West Ham in the contest before Ward-Prowse completed the rout in the dying moments. Bertrand again overlapped down the left, feeding the onrushing Davis with Ward-Prowse mopping up the spillage and scoring.

Southampton could have a hat full, with Adrian making good saves from Tadić, Redmond and Ward-Prowse in the second half. Not content with the impressive win, Claude Puel gave Tadić an earful when he took him off, despite the Serb's stellar display.

Attention now turns to Hapoel Be'er Sheva on Thursday night, with Southampton looking to take control of their Europa League group. After that, Puel's men then head to Champions Leicester before the international break. Win those, and Saints will go into a crucial run of games full of confidence with the boss's tactics and rotation policy paying dividends.